When most people hear the phrase “virtual reality,” or VR, their minds go straight to video games. And with good reasons! This technology has become incredibly popular in the world of gaming. But the tech has grown well beyond the confines of gaming. In fact, many high-profile technology companies, like Meta, Google, and HTC, are investing heavily in immersive technologies like VR. As a result, VR in business is transforming operations across industries.

In this post we’ll explore several ways VR in business is having a major impact.

VR in Business Can Impact All Verticals

Most of the hype surrounding the release of mainstream VR headsets focuses on their potential for entertainment. However, in truth, predictions show VR in business will far outpace entertainment use. According to Statista, the global augmented reality (AR), mixed reality (MR), and VR market reached $28 billion in 2021, and is set to rise to over $250 billion by 2028.

As many enterprises have realized, this is because nearly any process that can be done in the real world can be simulated in VR. This includes many business-related activities, including customer service, marketing, finance, HR, production, and more. Generally speaking, any task that can be performed with VR will fall into two categories: training and practical application.

For training, the use of VR allows for complete immersion in any situation that can be simulated with a computer. As the technology continues to improve, photorealistic visuals can be used to “trick” the mind into believing—to a certain extent—that what it sees is real. This helps users to monitor and learn from any interaction in the simulation. One interesting example of this is Roundtable Learning’s Diversity and Inclusion training. Using 360 degree VR training, Roundtable Learning helps teach people how to recognize unconscious bias within themselves and others.

There’s no denying that in today’s digital-first world, mobile applications have become indispensable for business. In fact, roughly 90% of the time people spend on their phones is spent on apps. Apps now represent a critical way for enterprises to connect with their customers—and their wallets.

While standard apps have proven their worth, brands always need new ways to make their mobile apps stand out by offering better services. Today, one of the key ways to achieve this is through the implementation of VR technology for apps.

When it comes to training, VR’s risk free nature is its most obvious advantage. Trainers can simply reset the simulation with each mistake.

This is already being used in healthcare settings, where surgeons use VR to train in making life-and-death decisions while performing complicated operations on child patients. These detailed simulations often include 3D models of the real nurses trainees work with. This way, they can see familiar faces when they perform real-world surgeries.

Another prominent use comes from the airline industry. Pilots have long relied on sophisticated simulations for flight training. But more cost effective and portable VR applications have begun to replace the multi-million dollar, room-sized simulators.

While both of these examples are highly technical, VR training is also being utilized to help teach “soft skills.” One such example comes from Verizon, where they have implemented a module to help train call-center employees on how to deescalate a conversation with an angry customer. According to data collected internally by Verizon, VR has improved the consistency and effectiveness of the training. In fact, VR training has reduced the overall training period for employees from 10 hours per person to 30 minutes.

Sales and marketing, in any industry, has always relied on the “wow factor,” and VR is proving to be the latest and greatest in this regard.

VR in business apps allow the sales team to fully immerse their clients in an environment where they can experience and interact with a product. One example of this might be a lighting company using VR to show the difference in areas before and after appropriate lighting. Businesses might also use VR to introduce new products to customers. In fact, implementing VR applications has become so simple and cost-effective that companies can now create one-off apps for specific purposes.

When it comes to sales and marketing there is no limit to the number and kinds of use-cases. Companies can create virtual showrooms, catalogs, use scenarios, and more to highlight the functionality of their products and services.

As previously mentioned, VR has already made a big splash in healthcare when it comes to training. But that isn’t its only advantage in the healthcare industry. In addition to helping doctors hone their skills, VR has the potential to become a central part of healthcare consulting and even a treatment option.

VR has been useful in counseling therapies that help patients in the areas of rehabilitation, pain management, and coping with post-traumatic stress disorder (PTSD). What’s more, VR shows promise in helping to treat neurological disorders. For example, VR can aid in motor learning to improve recovery following a brain injury. It might also be helpful in therapy for those with autism or Asperger’s, as well as slow memory loss in illnesses like Alzheimer’s.

Another industry where VR has already made changes is financial technology, specifically in the areas of data visualization, virtual payments, and customer acquisition.

When it comes to data visualization, VR makies it easier and faster to visualize large amounts of data. For example, Fidelity Labs created a virtual world they call “Stockcity.” In this digital environment, stock portfolios are turned into a virtual 3D city, where investors can completely engross themselves in the data.

A further example of VR for the business of fintech comes in the form of virtual payments. In essence, this is simply a virtual encounter that lets customers make payments without leaving the virtual world. One example is the partnership between MasterCard and Wearability. They’ve created a way to allow users to make purchases by simply nodding and focusing on the “buy” button.

Lastly, VR excels in the area of customer acquisition. Millennials and Gen Z have grown up in a vastly different world than the generations that came before them. Because these generations grew up with technology, they view many systems through a different lens than their elders. In fact, more than 25% of Gen Z and nearly 33% of Millennials now use a digital bank as their primary checking account provider. 60% of these people have an account with Chime, PayPal, or Cash App.

Banks and other financial institutions that want to appeal to this group of consumers, as well as the generations that will follow, are already incorporating more technology, including VR, to attract and retain customers.

For decades media companies have looked for an effective way to combine video and gaming, with varied results. But the goal of interactive movies, virtual group watching, and video-based gaming has finally found a home in virtual reality.

Thanks to the immersive quality of VR, even people with little interest in traditional gaming have the potential to be hooked. What’s more, those isolated due to illness or distance can partake in group activities, like watching movies together, or playing interactive games together as though they were in the same room.

Of course, the challenge to create something both immersive and engaging still exists, but VR provides interactive options that traditional forms of media and gaming can only dream of. 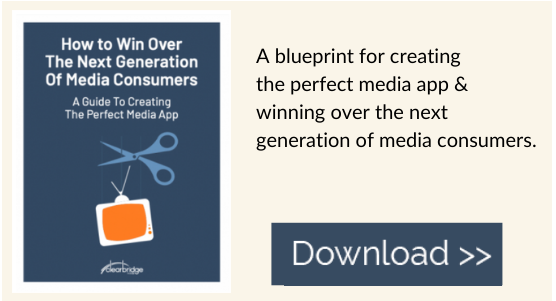 The Future of Virtual Reality

The days of looking at VR as the sole purview of video games is coming to an end. Fully immersive VR in business is transforming the way companies collaborate, both internally and with their customers. No matter the industry, business enterprises that adopt VR applications early will earn the greatest rewards. Those who are late- or non-adopters will be left by the wayside.

The main obstacle most businesses face with implementing VR will undoubtedly be a lack of experience. However, by working with a mobile app developer that understands the ins and outs of virtual reality, the custom solution you need quickly and cost-effectively is at your fingertips.

When is it Time to Find a New Mobile App Development Partner: A Guide for Enterprises

The State of UX Design in Mobile App Development: 8 Trends for 2022